Returning for the second year, the Africa Code Week AfriCAN Code Challenge presents their top 10 winners with Devansh and Darshika from Mauritius as the Pan-African competition winners!

An annual celebration of coding throughout Africa

The AfriCAN Code Challenge is a pan-African coding competition where youth aged 8 - 16 were tasked with coding a game using the Scratch programming language to address the theme that was determined by the Africa Code Week team. This competition was launched by SAP Africa Code Week and partners UNESCO, Irish Aid and the Association for the Development of Education in Africa (ADEA) in September 2020, and since then has become an annual celebration of youth and innovation in Africa.

The rationale for chosing this year’s superheroe theme was to allow children to unleash their creativity and express themselves freely on issues they feel are important to them. Davide Storti, Coordinator of the YouthMobile Initiative at UNESCO, says: “The post-pandemic education recovery starts with allowing our children to regain confidence and hope, and with us adults reopening spaces, although virtual, for them to access their fullest potential."

To take part in the AfriCAN Code Challenge, youth were able to enter alone or in teams of up to five people, and entries featured a three-minute YouTube video showcasing how their game works and why it should be considered a winning entry. The unique initiative and entry mechanism called upon the children’s ability to design a project that would solve a community-issue, code it, and communicate it.

The winners of the AfriCAN Code Challenge 2021

During the opening rounds of the challenge, participation reached across 40 countries and featured 102 project video clips, only the top three entries from 36 countries made it into the continental final, followed by 20 countries in the final judging stage.

The 2021 edition of the AfriCAN Code Challenge was quite unique, as for the first time, hearing-impaired students participated in the competition proving once again that coding is the language of inclusivity and creativity.

Claire Gillissen-Duval, Director of EMEA Corporate Social Responsibility and Co-founder of Africa Code Week at SAP adds, “The  return of the AfriCAN Code Challenge was awaited by our incredible SAP volunteers who took part in the first line of jury. The presence of hearing-impaired students demonstrates the power of inclusivity that resides in digital literacy, in its capacity to build bridges and connect children of an entire continent, regardless of gender, age or ability.”

Calling all coding enthusiasts: did you know that more children in Africa are likely to have access to a smart phone than a computer? Here’s five reasons to download the Africa Code Week app and put those 21st century skills to practice!

The ACW app allows you to progress your skillset according to your ability and level. Available in 4 languages (English, French, Portuguese, and Arabic) with more than 30 coding lessons based on MIT’s Scratch, the app is accessible for all to improve their digital knowledge.

Every future job will at some stage require digital skills! You may dream of becoming a lawyer or a doctor one day, but whatever profession you choose, digital skills are imperative. For example, if you become a surgeon, you’ll likely rely on computer systems to perform intricate procedures and monitor the well-being of your patients. If you become a lawyer, artificial intelligence (AI) may help you understand previous cases in order to build your own strategy when you defend your client in court. The clock is ticking!

Teachers can be inspired too

If you’re a teacher, the ACW app will help you prepare your own coding lessons. Many teachers feel daunted by coding and may not understand it. The app not only helps to get ahead and grasp the basics of coding, but teachers can also explain the subject with more confidence.

Teachers can upskill themselves

In learning how to code and how to teach coding, teachers will be able to prepare their students for the future, as well as future-proof their own careers. Rather than feeling threatened, teachers can embrace new technology and the creative possibilities that it holds for their students.

Join a community of like-minded people across Africa

The wonderful thing about technology is how it can transcend borders and unite people. One of the niftiest benefits of the app is how it can find and reach similar people and interest groups who share the same passion for coding. Who knows, you could even collaborate on an interactive game that will be the next winner at the AfriCAN Code Challenge!

The Africa Code Week smartphone app is designed to make teaching and learning material about coding accessible to everyone. Available on the Google Play Store, it is easy to use for both teachers and students. Let the code (and fun), begin!

Returning for a second edition, the AfriCAN Code Challenge is a pan-African coding competition where youth aged 8 to 16 were tasked with coding a game using the Scratch programming language to show how they would change the world with their superpowers. Youth were able to enter alone or in teams of up to five people, tapping into a wide range of essential skills from problem-solving and coding all the way to teamwork and communications. Each entry had to include a three-minute YouTube video showing how the game works and why it should win.

In total, 40 countries participated, with over 100 project videos submitted. The top three entries from 36 countries made it into the continental final, with 20 projects making it to the final judging stage!

Here are the 20 projects that made it through to the final round / Voici les 20 projets finalistes :

Teaching really is a work of heart, and this year’s Africa Code Week Women Empowerment Workshop couldn’t be better suited. The first pilot program officially commenced last year, and little did the organisers know what a great success it would be. This year, the Women Empowerment Workshop returns for its second edition and will host more than 70 women from across Africa. 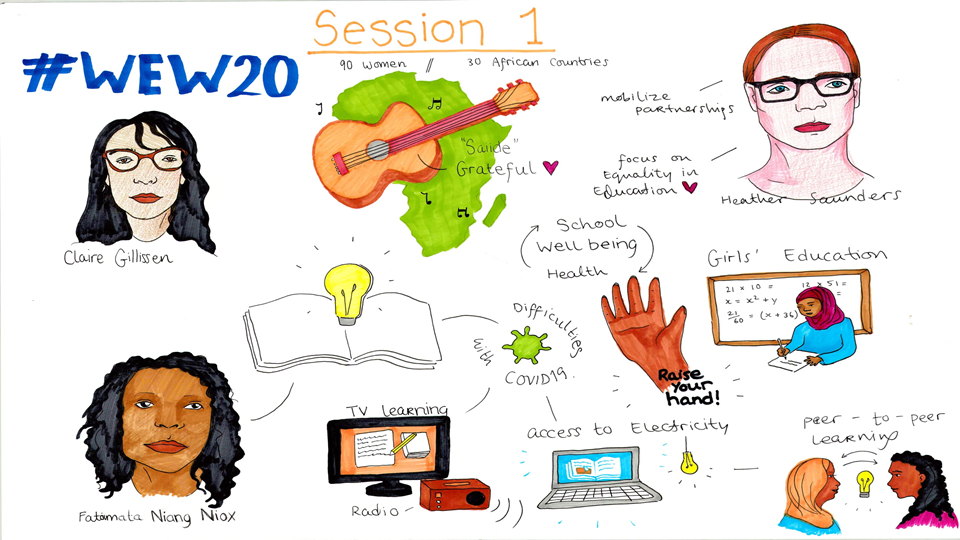 Organized by SAP, UNESCO, Irish Aid and the Moroccan Ministry of National Education the unique digital event will provide female teachers with the opportunity to meet, collaborate and connect on best teaching practices and new 21st century skills. The Women Empowerment Workshop will also provide a space for teachers to discuss online learning and gain understanding of the issues related to virtual classrooms; such as cyberbullying and internet safety. 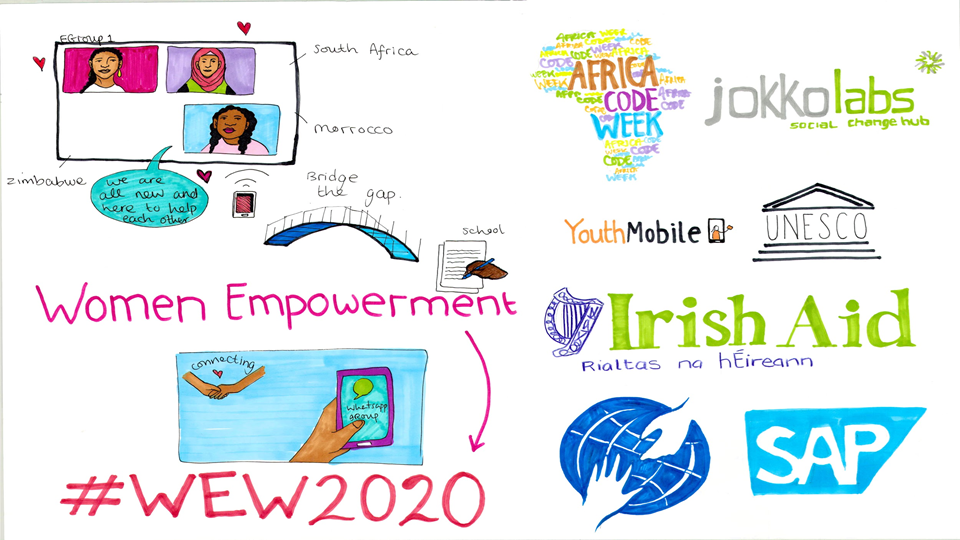 Taking place from November, seven interactive workshops will be scheduled each week and highlight different themes and topics relevant to Africa Code Week’s key enabler. Fun, engaging and collaborative, expert speakers will present in both English and French.

With 1 out of 3 children missing out on remote learning because of today’s unprecedented challenges, the role of the teacher in community-based societies is central and reinforcing teacher leadership is crucial. Adding to the importance of advancing women in today’s modern teaching space, Africa Code Week Co-founder and Head of Corporate Social Responsibility (CSR) at SAP EMEA, Claire Gillissen-Duval adds, “We are incredibly excited to welcome our second edition of the Women Empowerment Workshops! Last year’s pilot program was a great success and we received positive feedback from all participants. Through our webinar series, we aim to close the digital gender gap and help ensure everyone can play a role in shaping Africa’s future in the Fourth Industrial Revolution (4IR).” 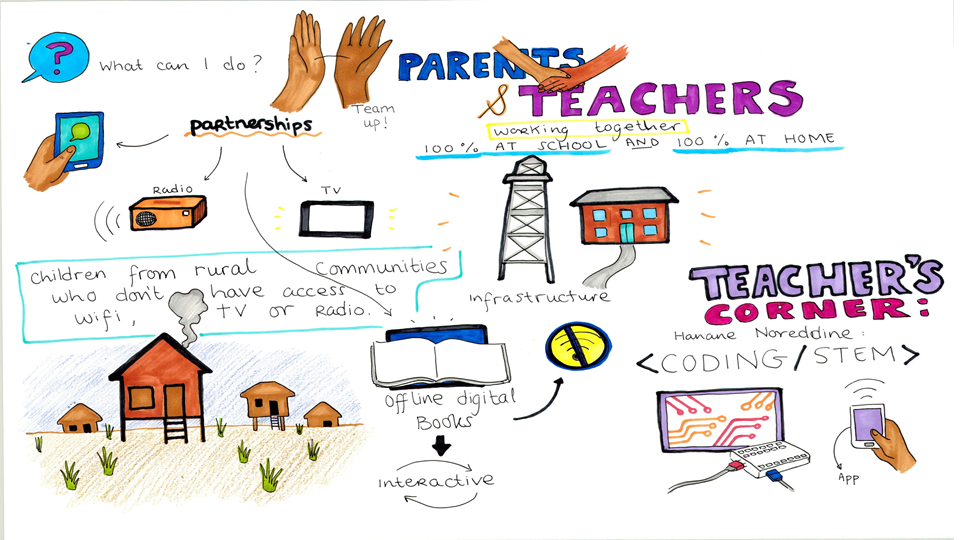 Last year’s group of 28 female teachers attended the workshop in Morocco and came from +14 African countries. Over the course of four days, female participants attended training sessions that focussed on computational and design thinking agendas. After getting to grips with the technologies sitting at the heart of the 4IR, participants also shared best practices on girl mentoring, capacity-building strategies and imparting digital skills to students. And this year’s event promises to be even better!

Let’s show our ACW support as our female participants engage in this important learning process to help conquer Africa’s digital divide. We invite you to leave comments here and to help spread the message using #WEW2020. 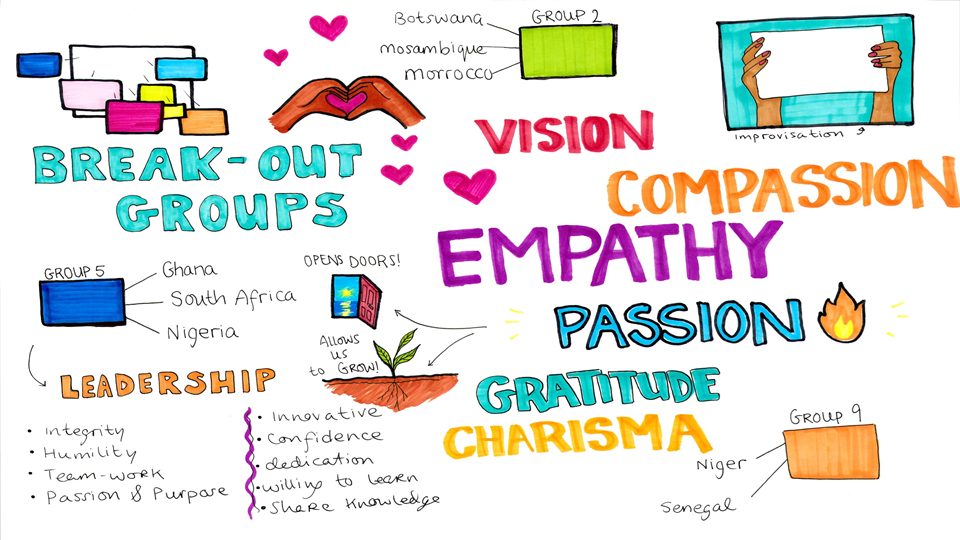